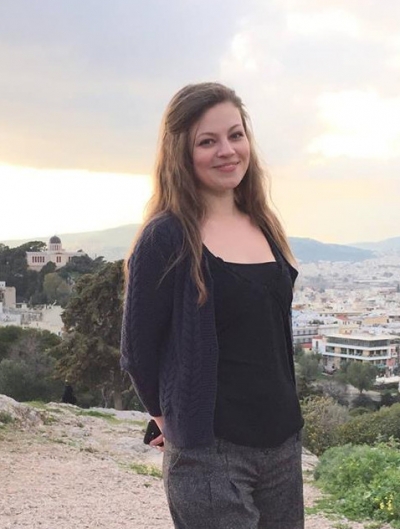 Through the eyes of a volunteer

Our team grew with our volunteers!
How is it then, for the first time to be with the children at the tests of games for people who are blind?

"Oh .. now I can’t see you.. where are you?" I said, taking off my glasses. Gregory  put on his colorful glasses and said laughing "I see you". Then I woremy glasses and said "ha! And I see you". This game lasted a few minutes, until the laptops of Vassilis and Paul were setup for the children of the Special Primary School for the Blind in Kallithea to try the Memor-i game and record whatever changes are needed in order to improve the game.

Memor-i is an electronic game that is now being developed by SciFY. It's like the game we played when we were young, where you have to find the cards with two identical animals. In our case, it is specially designed to be played by children that are blind or with low vision. For example, it has "doors" which, when opened, you see a small animal and together with the image, you hear the sound it makes, so you can match pairs and win.The children can be navigate in the game with a special interface and soundeffects. At the Elementary School for the Blind in Kallithea, children with impaired vision were to test it, like Gregoris, with whose glasses we played with.

Children that do not see at all also tested it. One of these children is Alice. Vassilis informed us that she had tried both previous games for blind children (LEAP) with excellent results: she was incredibly enthusiastic for the game, and we achieved educational goals, as well. While essentially she does not know how to use a computer, the game became the reason she started to learn, to come into contact with it: without seeing the keyboard, she recognizes and remembers the location of the keys, with which she will be move in the game. As we have learned from our actions so far, this is true for almost all blind children in gradeschool: through the game they start learning about computers.

Success for little Alice is not only in the electronic space of games, as we were informed proudly by her teacher; she has lent her voice to the narration of the story of “Paplomatou”, for which each child has made their own book. This book has pages on which the children have created "images" of various craft scardboard / fabrics and pages on which the text of the story isprinted. Text for the sighted and Braille (Braille Code) for those who do not see at all.

Children who came to help us improve Memor-i, were all so excited that they would do something different in their everyday life, something their mom could do, their dad, their brothers and most of us. Something we take for granted, is anadventure for them. In their voice, you recognized the joy, they did not want the game to end and give their turn to the other children. Even children who had not touched a keyboard before, wanted to try again. When we told them it is at an early stage and we want their help to finish it, the response was outstanding: all of them told us with enthusiasm that the game is perfect and they would play again even at this incomplete stage!

All this communication, in addition to improvements to the Memor-i game, gave us inspiration for other things. Any child we met at the Special Primary School for the Blind in Kallithea, had the well known children's liveliness, the interest to learn new things, enthusiasm to talk to us for everyday things, such as an afternoon walk, or what dream they saw at night! It is nice to hear that even people who do not see the world with the same ease that we do, have their own dreams and plans a colorful future for everyone.

*Names of the children are changed to protect their privacy